The multi location body temperature monitoring system consist of a number of small wireless sensors that measures temperature and humidity. These sensors can be made very thin and small like a plaster. Information is streamed wireless to a central logger or directly to your smartphone using Bluetooth Low Energy. The exact execution will depend on the final specifications. The smartphone visualizes measurements and sends them to the cloud, so that they are remotely accessible for research and clinical purposes. 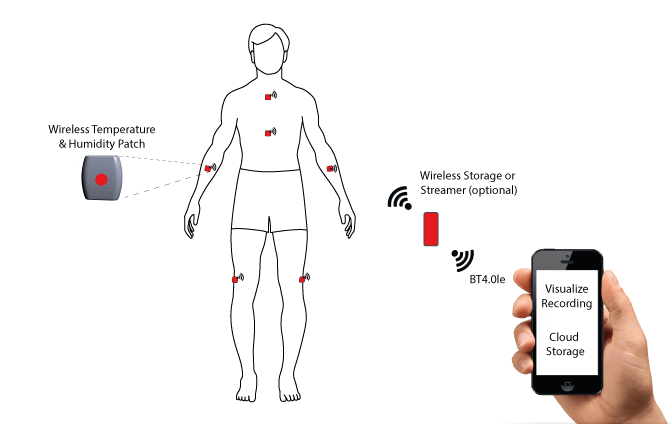 Joslin researchers unveil secrets of the fat that may make you thinner—and less prone to diabetes. What does it take to burn off the extra weight that puts so many people at risk of type 2 diabetes and related diseases?

Joslin’s C. Ronald Kahn, M.D., Aaron Cypess, M.D., Ph.D., and their colleagues looked for brown fat in the radiology scans of adults who had undergone the testing for other reasons. They found small collections of brown fat in the neck and around the collarbones that tended to show up in younger, leaner adults examined in cooler seasons, while these collections were not seen in older, obese individuals. Women had detectable brown fat twice as often as men. Other papers published in the same issue of the New England Journal of Medicine and elsewhere since then have confirmed and extended these original observations.

In the desperate search for more effective tools to combat the twin epidemics of obesity and type 2 diabetes, the surprising possibilities of brown fat represent a potential metabolic bonanza. But this enticing idea requires a lot of fleshing out, a task in which the Kahn and Cypess labs are joined by the lab of Yu-Hua Tseng, Ph.D. Source: Joslin Research

Obesity happens when energy intake exceeds energy expenditure. Brown fat may help balance the equation, if scientists can harness the energy-burning power for clinical application. “Brown fat is not a cure for obesity,” cautions Dr. Cypess, “but burning off a hundred or more extra calories a day could add up.” Additionally, studies in mice show that brown fat activity appears to reduce the metabolic complications of obesity, such as high blood sugar levels and low insulin sensitivity, even if the mice don’t lose weight. “We don’t know if that’s true in humans,” Dr. Kahn says. What Dr. Cypess calls the Joslin “fat team” is at the center of a hub of projects across multiple labs designed to understand the epidemiology, biology and clinical utility of brown fat. Among the open questions, exactly how much energy does brown fat burn? In preliminary experiments by Drs. Cypess and Kahn, normal-weight people who sit in a 59-degree room for two hours with summer clothing seem to chew up energy at a rate of 100 to 250 calories per day.

One challenge is finding a better way to measure brown fat in humans. Radiation-based imaging exposes people to small but cumulatively harmful risks. Magnetic resonance imaging (MRI) is expensive. In his office, Dr. Cypess demonstrates a bulky handheld infrared camera he’s testing. The manufacturer sells it to identify heat leakage from homes but in people it might reveal telltale brown fat hot spots.

An Accurate Affordable Method To Follow People In Daily Life

The wireless temperature & humidity sensing system could be a simple monitoring device that tracks temperature of trunk, arm, neck and/or legs and relate it to the appearance of brown fat.